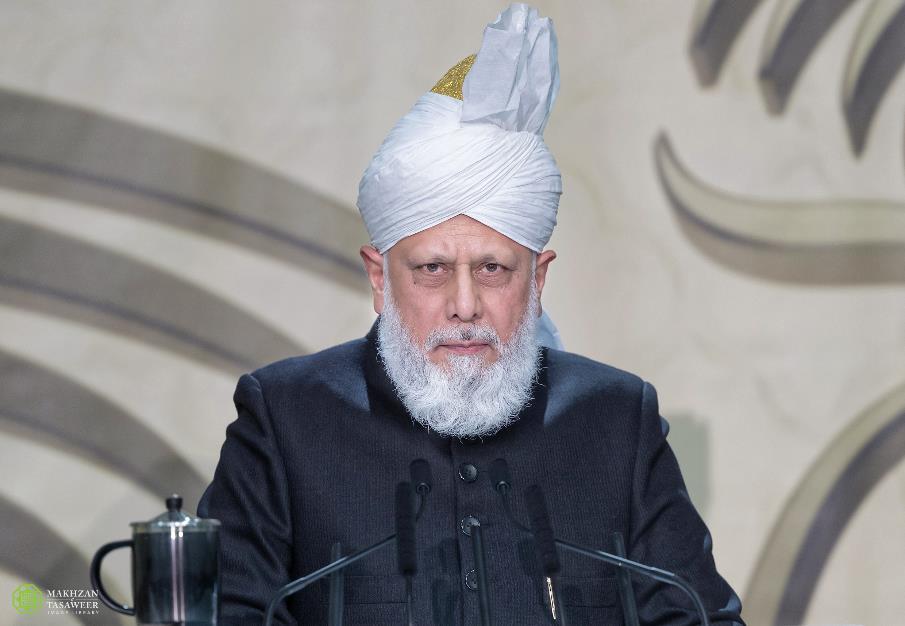 The event was held at the Baitul Futuh Mosque in London with an audience of more than 900, from 31 countries, including 570 non-Ahmadi guests comprising Ministers, Ambassadors of State, Members of Parliament and various other dignitaries and guests.

During the event, His Holiness presented Angelina Alekseeva, the representative of Dr Leonid Roshal, a noted paediatrician from Moscow, Russia and Chairman of international charity Fund to Help Children in Disasters and Wars, with the Ahmadiyya Muslim Prize for the Advancement of Peace in recognition of his outstanding medical and humanitarian services. 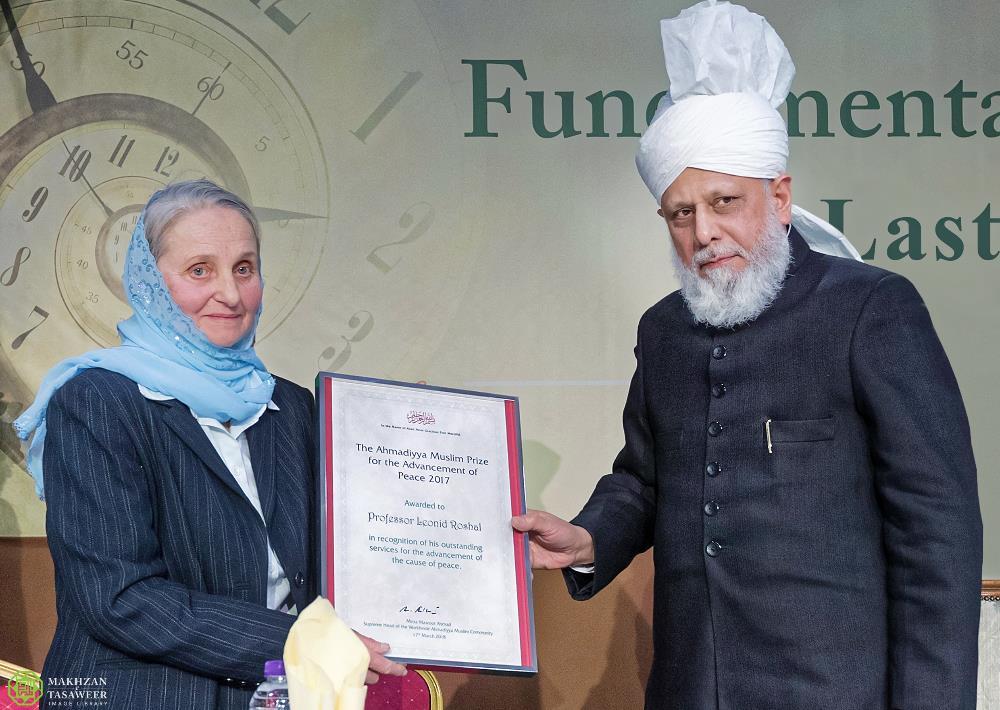 During his address, Hazrat Mirza Masroor Ahmad said that the Ahmadiyya Muslim Community would never cease its efforts to spread peace in the world. He urged world leaders and governments to

and to help ease the suffering of people in developing nations.

His Holiness vehemently condemned the international arms trade and said that those nations who were producing weapons being used in war-torn countries had “blood on their hands”. He also said that children born into extreme poverty or in areas of conflict were easy and vulnerable targets for terrorist recruiters. His Holiness spoke of the dangers of extremism amongst Muslims and the increasing threat of far-right nationalists. His Holiness also refuted claims that Islamic teachings promoted any form of terrorism or extremism.

Speaking about the continued efforts of the Ahmadiyya Muslim Community to spread peace and to promote mutual respect and tolerance, Hazrat Mirza Masroor Ahmad said:

“Our faith demands us to try and urge people, in all parts of the world, whether rich or poor, whether powerful or oppressed, whether religious or irreligious, towards peace and justice.”

“In recent times, one of the issues that many politicians and intellectuals have debated and campaigned about, is climate change and specifically a reduction in carbon emissions. Certainly, striving to protect the environment and to look after our planet is an extremely precious and noble cause. Yet, at the same time, the developed world, and especially the world’s leaders, should also realise that there are other issues that must be tackled with the same urgency.”

“People living in the world’s poorest nations do not concern themselves with the environment, or the latest figures on carbon emissions; rather, they wake up each day wondering if they will be able to feed their children.”

“We must not consider such hardship as other people’s problems. Instead, we must realise that the result of such poverty has severe implications for the wider-world and directly affects global peace and security. The fact that children have no option, but to spend their days collecting water for their families, means that they are unable to go to school, or to attain any form of education. They are stuck in a vicious cycle of illiteracy and poverty that is seemingly endless and hugely damaging to society.”

“Frustrations are being preyed upon by extremists, who entice the impoverished with financial reward and by promising a better life for their families. Similarly, the targeting of illiterate youth means that the extremists have free rein to radicalise and brainwash them.”

“Poor nations must not be looked down upon, rather we should consider them as part of our family – our brothers and sisters. By helping the developing nations stand on their own feet, and by giving their people opportunities and hope, we will actually be helping ourselves and safeguarding the future of the world.”

Referring to the rise of nationalism and the threat of the far-right in the Western world, Hazrat Mirza Masroor Ahmad said:

“As a result of recent terrorist attacks and widespread immigration to the West, there has also been a dangerous rise in nationalism in many Western countries, evoking fears of the dark days of the past. It is particularly disturbing that far-right groups have become increasingly vocal and have seen their membership rise and have even made political gains. They too are extremists, who seek to poison Western society, by inciting the masses against those who have a different colour of skin or who hold different beliefs.”

“In addition, the rhetoric of certain powerful world leaders has become increasingly nationalistic and belligerent, as they have pledged to put the rights of their own citizens above all others. I do not dispute the fact that it is the responsibility of governments and leaders to look after their own people and to protect their interests. Certainly, as long as the leaders act with justice, and do not infringe upon the rights of others, attempts to better the lives of their citizens is a great virtue. However, policies that are based upon selfishness, greed and a readiness to forfeit the rights of others are wrong and a means of sowing discord and division in the world.”

His Holiness spoke of the hypocrisy rooted in the international arms trade and the danger it posed to the world. To boost their national economies, world powers were selling “inhumane” weapons that were destroying towns and cities and unjustly robbing millions of people of their futures.

He said that in countries like Syria, government soldiers, rebels and terrorists were fighting one another but despite their divergent interests, they all had one thing in common – that the vast majority of their weapons have been produced externally in the developed world.

“Quite openly and proudly, the major powers are trading arms that are being used to kill, maim and brutalise innocent people. Regrettably, such nations are focused only on attempts to boost their economy and to maximise their nation’s capital, without pausing for thought at the consequences. They desperately seek to attain the largest possible contracts to sell destructive weapons that, once fired, do not distinguish between the innocent and the guilty. They proudly sell weapons that make no exception for children, women or the infirm. They shamelessly sell weapons that engulf and obliterate towns and cities indiscriminately.”